OUR LAID BACK WAY

Kick off your shoes on a pristine and isolated beach at South Africa’s favourite holiday town, Mossel Bay in the Garden Route! Sip some wine, gaze over the water and indulge in seafood in abundance!

We at De Vette Mossel strive to offer much more than merely perfectly prepared seafood – this is an experience, in unusual and informal surroundings, where you relax with friends (old ones and newly found ones) where your time is your own and where you may eat as much as you like – just like we do along the West Coast.

The excellent preparation of top quality seafood, in abundance, and value for money, is our pride.

The different dishes are prepared and presented one after the other as a rolling buffet. We strive to prepare seafood perfectly, and to serve it immediately thereafter. This guarantees freshly prepared seafood on the plate – an absolute must for exceptional seafood.

FRUIT OF THE GRAPE

With arrival we welcome you with a complementary glass of good Cape wine.
We do have a well-stocked cash bar and specialize in stunning cocktails. 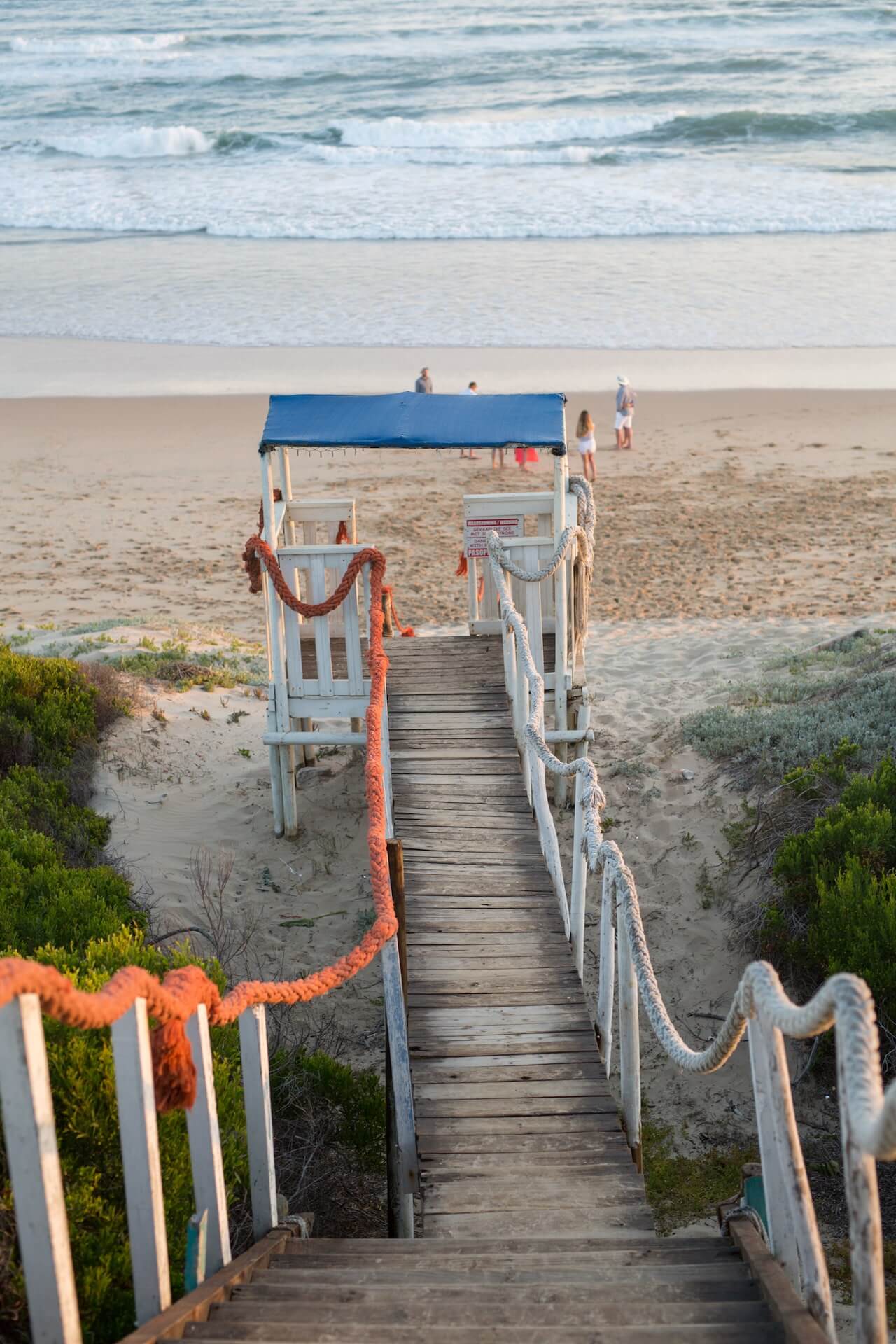 A wedding on the beach? It does not have to be only a dream! Talk to us to make your wedding day truly unforgettable – you are worth it!

Our Beach Seafood Restaurant is a perfect wedding venue, where love, romance, fun and dreams become a beautiful reality. De Vette Mossel has a unique beach/sea setting with unbeatable rates. Kick of your shoes for an unforgettable beach wedding and seafood buffet.

Please follow the link for more info of our weddings and common Questions & Answers.

De Vette Mossel lends itself perfectly to work functions, year-end functions, birthday bashes and other, where colleagues and friends can interact and enjoy themselves in an informal and relaxing atmosphere.

De Vette Mossel can easily accommodate large groups – we can seat up to 600 guests. 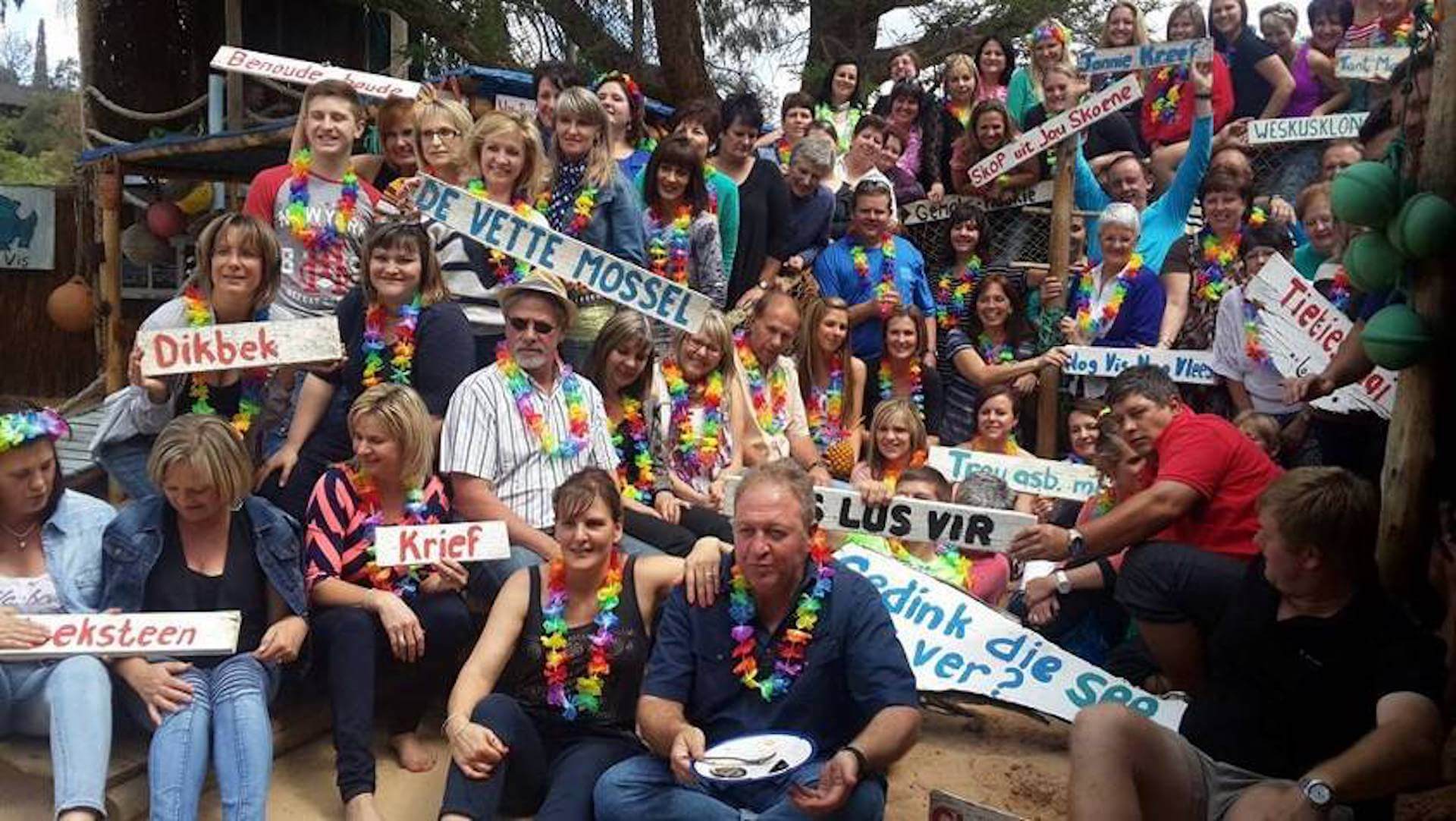 Although De Vette Mossel @ Grootbrak is partly an open air restaurant, all seating is under roof and protected against wind and rain. The entire seating area can be enclosed within seconds to shelter you from bad weather.

In any case, do not complain about the weather – this is Africa. We need rain to survive.

Founded December 2004
In December 2004, owner Niël du Bois followed his heart, gave his creative spirit free reins, took the plunge and did what many people only dream about – opening an open air restaurant literally on a beach. Where the best seafood is prepared and enjoyed in Spartan surroundings – just like on the West Coast.

The first De Vette Mossel Beach Seafood Restaurant was born. On an isolated and pristine beach at Groot Brak River near Mossel Bay.

Here at De Vette Mossel Grootbrak you are in the ever capable hands of Nikki Geyer, for whom there is no such thing as too much trouble, and now fully operates the restaurant throughout the year when Niël is taking a break or frying other fish.

The dozen or so chefs, cleaners and kitchen staff is a story in its own right. Only jobless people were employed, trained and today they form an integral part of De Vette Mossel. Without them, De Vette Mossel is not possible – they therefore also share in the fruits of success. 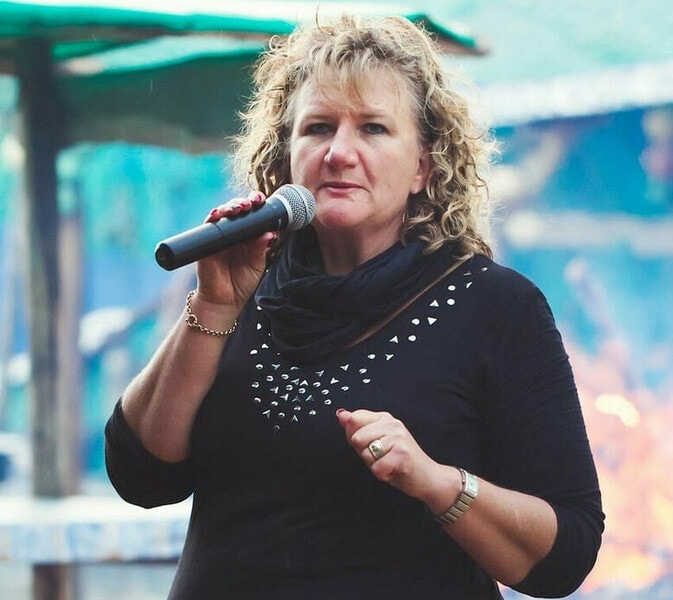 Offer an unforgettable and traditional, true West Coast experience to all people in a “lekker”, relaxing and sociable atmosphere.

Make a positive difference in the lives of our staff and in the communities in which we serve.

Excellence and passion in all we do.

People and food are our passion, guest satisfaction our pride and profit a bonus!
We do it 100% – because you are worth it!

DE VETTE MOSSEL @ GROOT BRAK is situated literally on the beach at Souwesia, between Klein- and Groot Brak River, near Mossel Bay on the Garden Route. (Between courses, the young ones – and the young of heart – go for a swim or play on the beach!).

From the N2 take the off ramp to Grootbrak River and turn right at the stop towards the sea. Turn right at the T-junction (at the Total Garage/De Dekke) onto the R102 (in the direction of Mossel Bay.) Turn left 1.5 km further and follow the road to the sea. 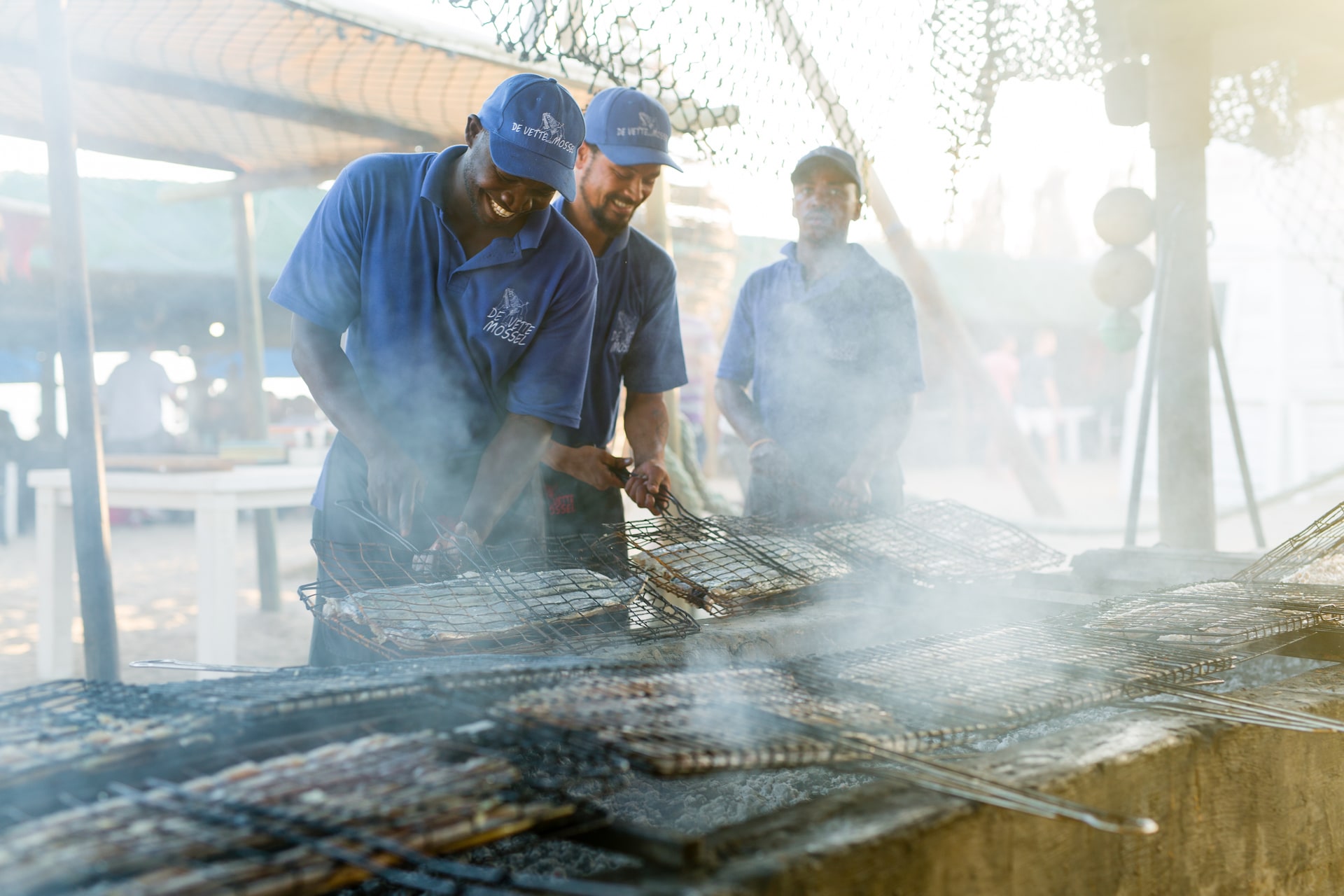 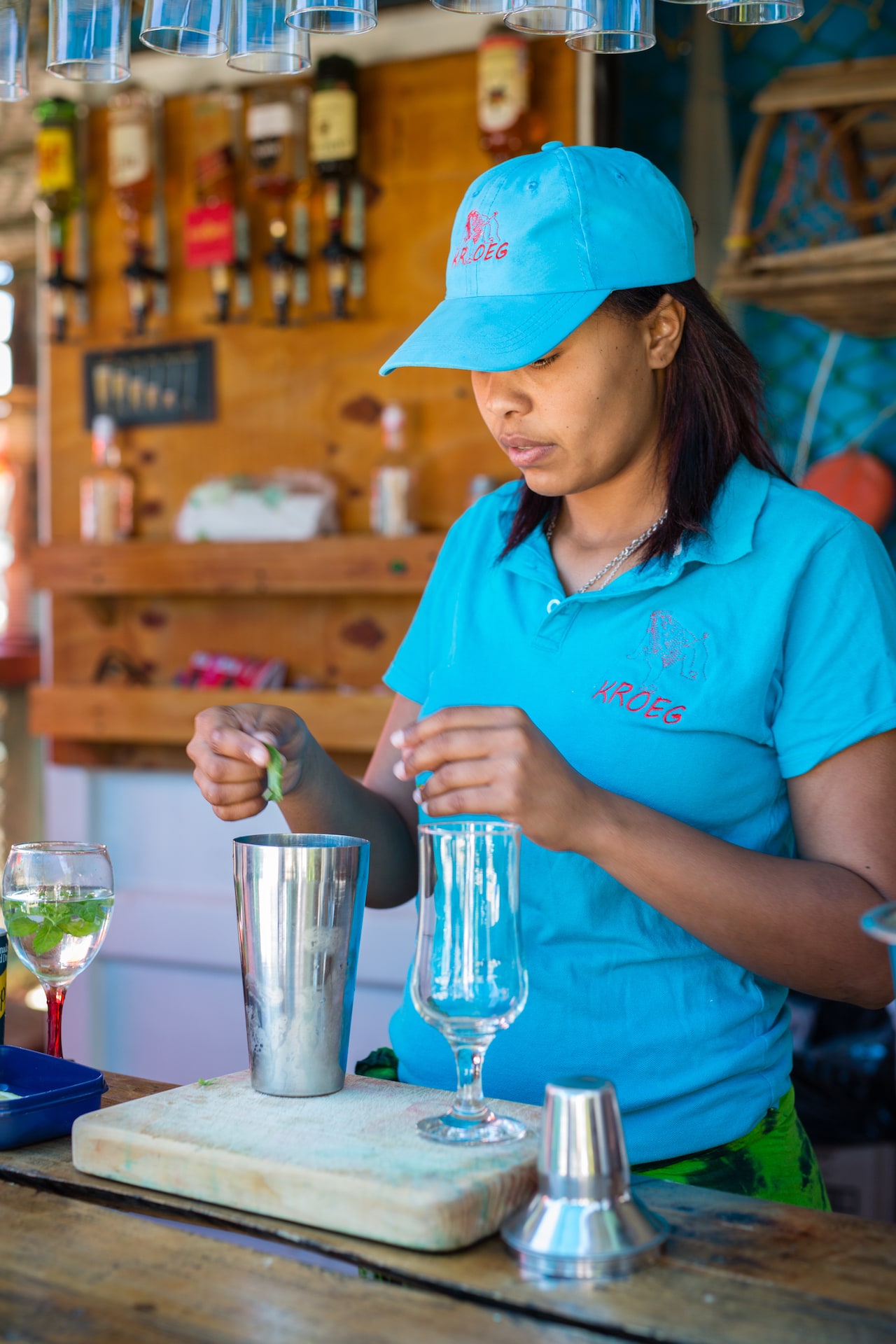 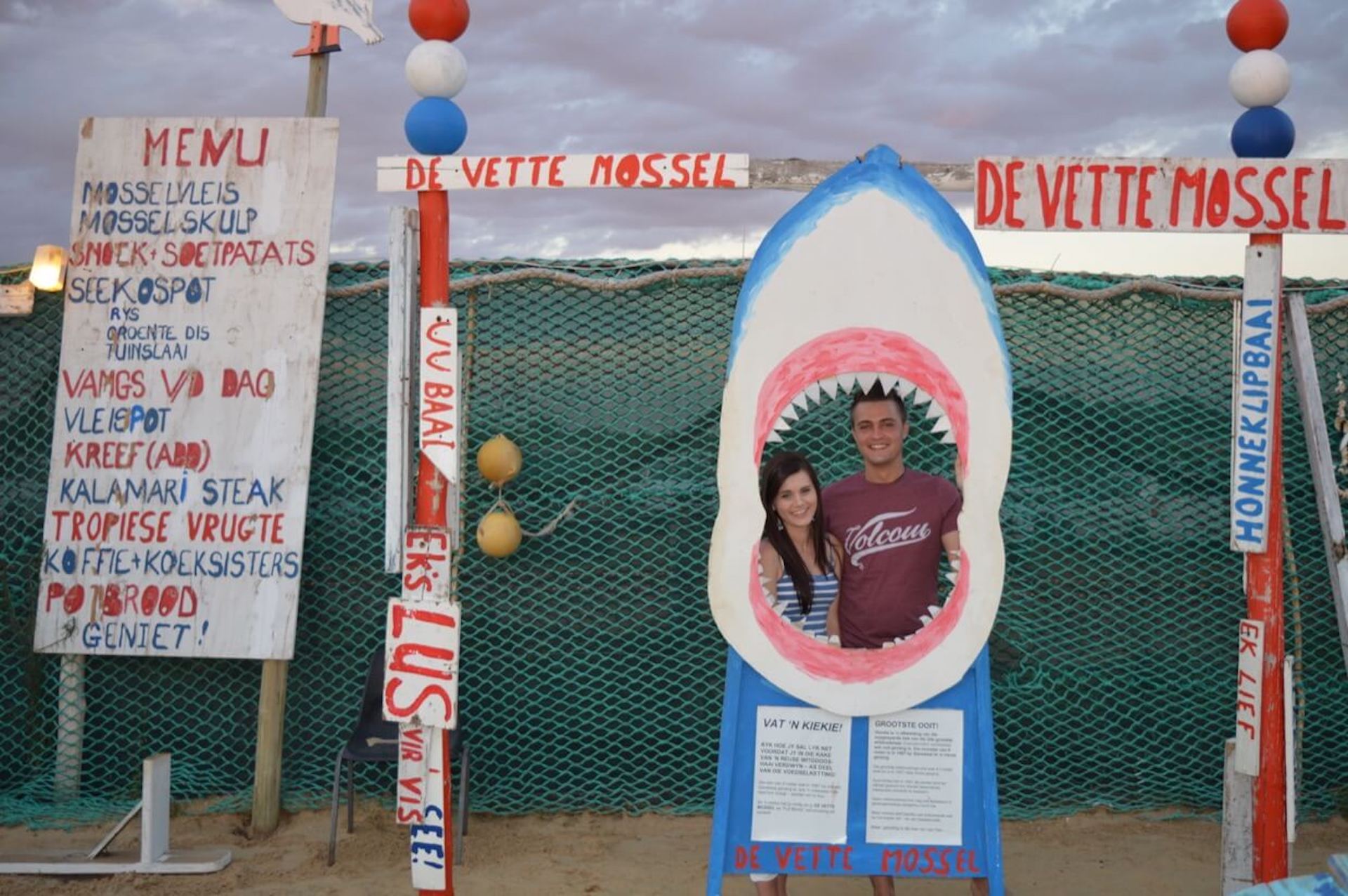 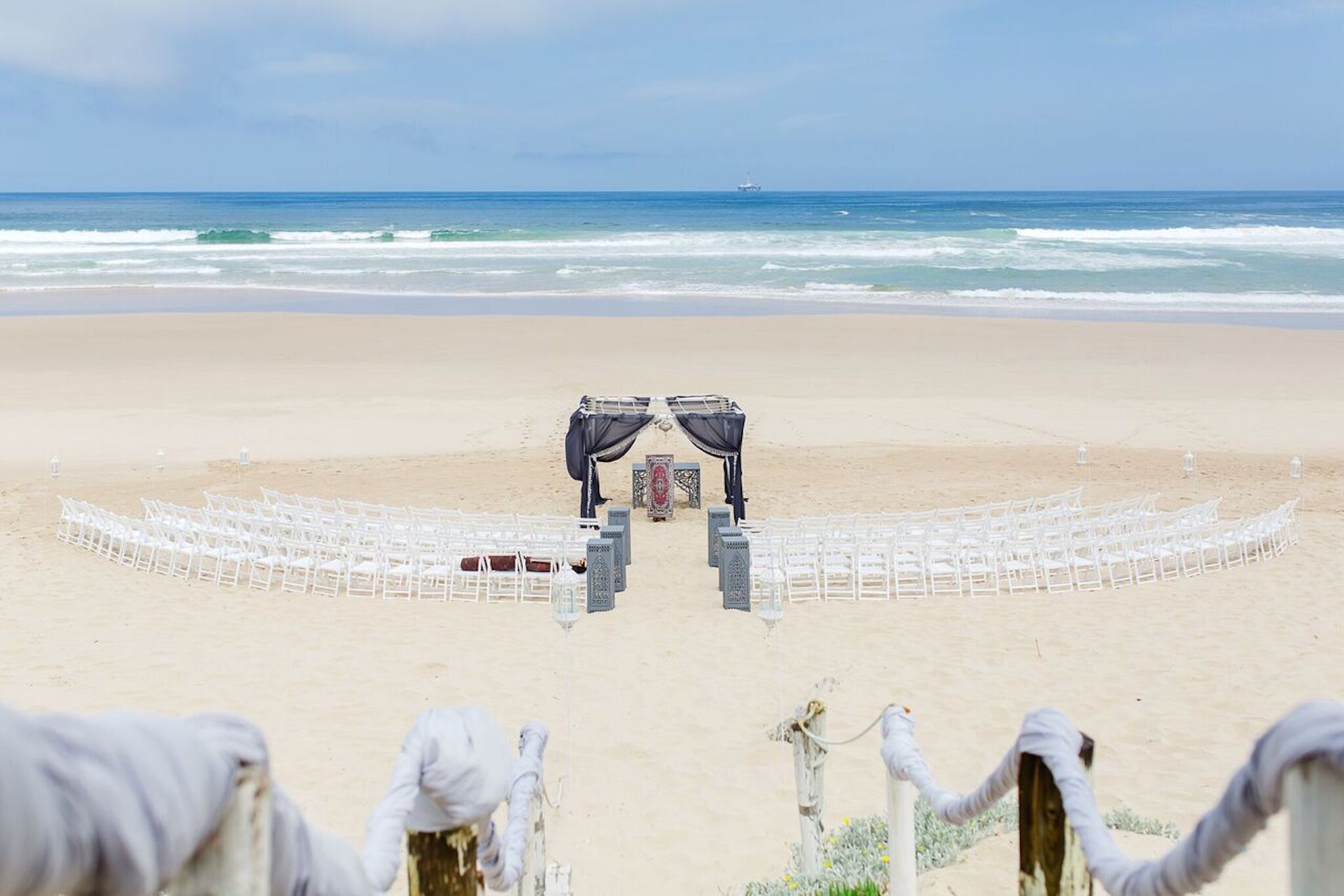 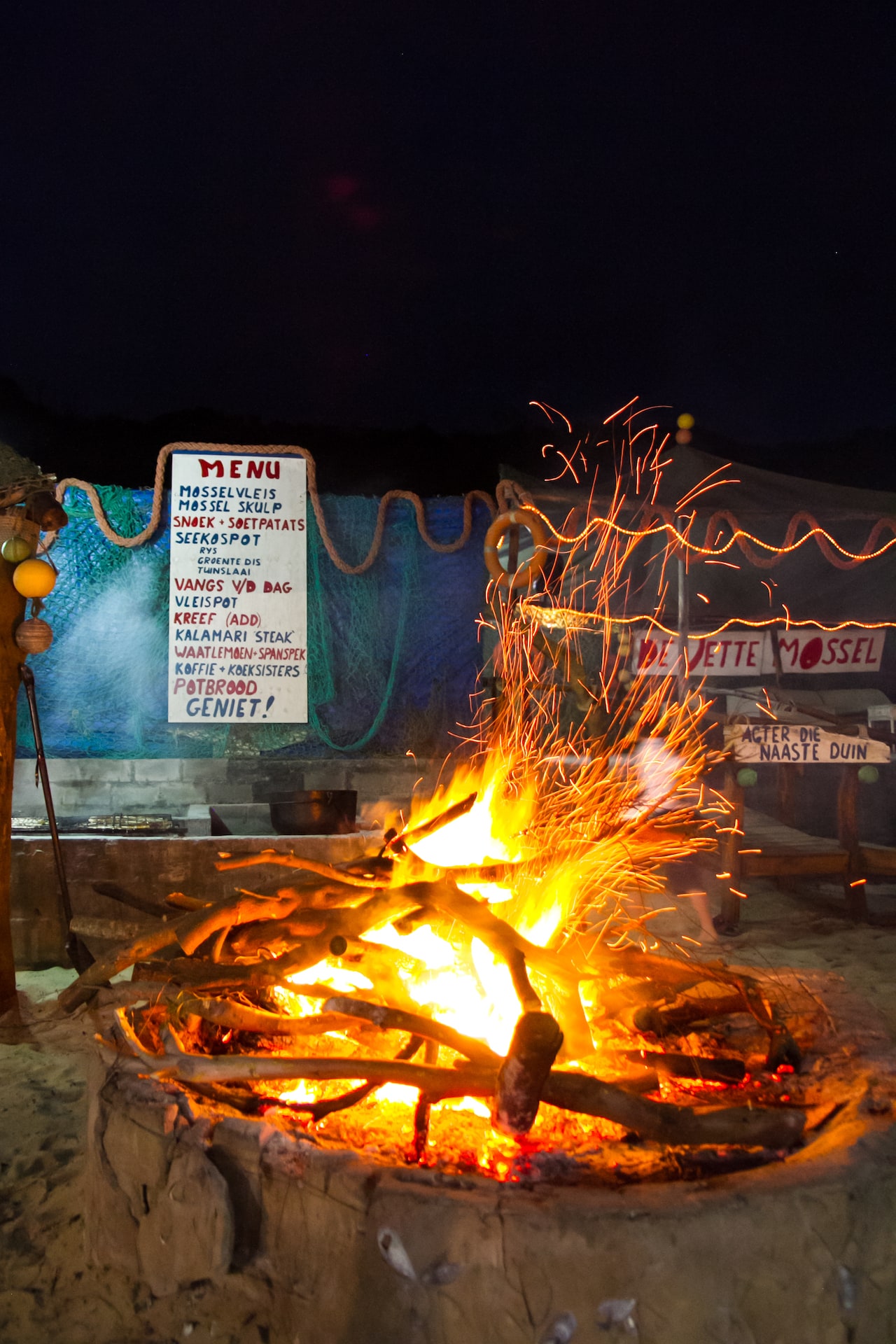 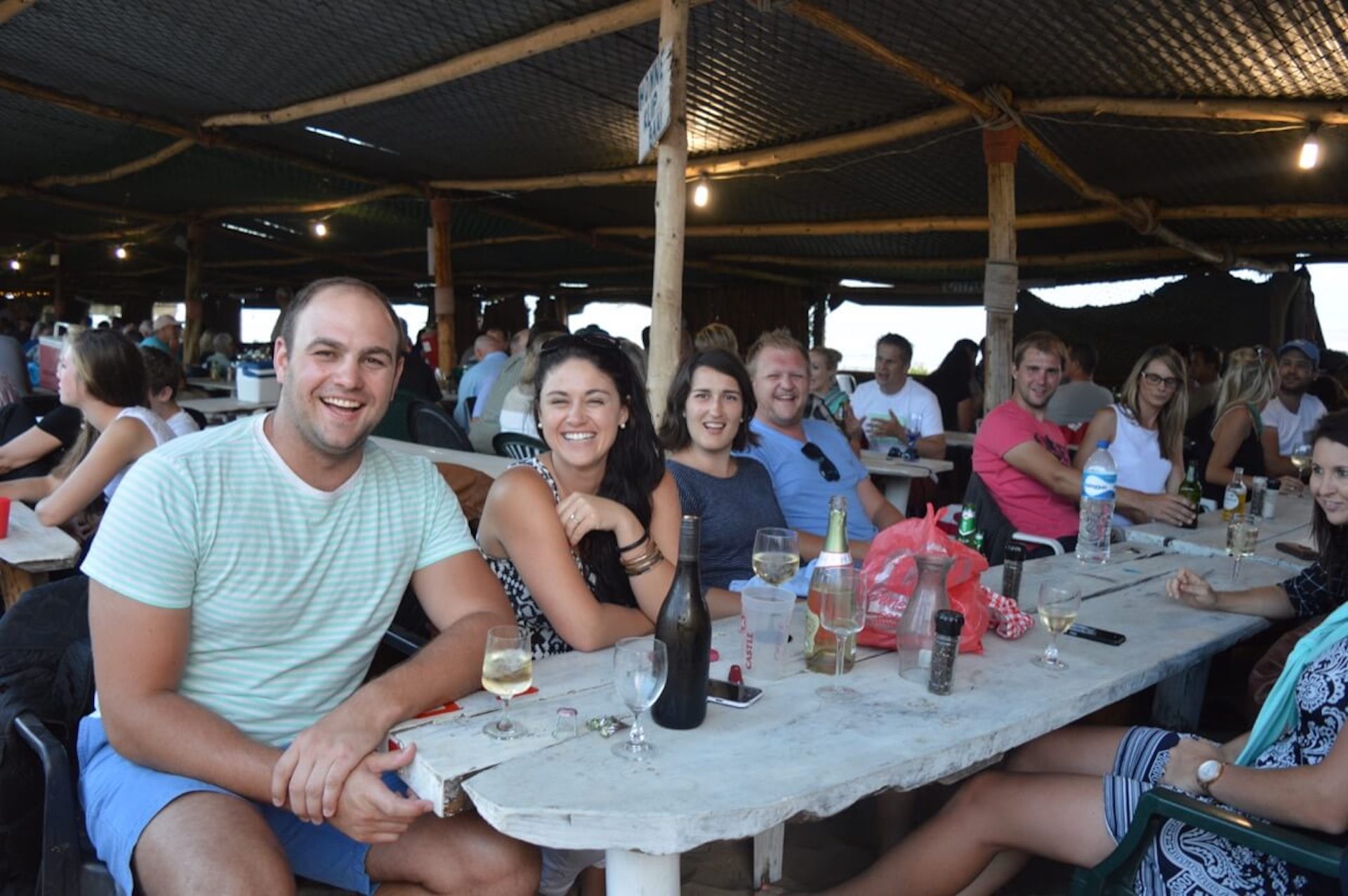 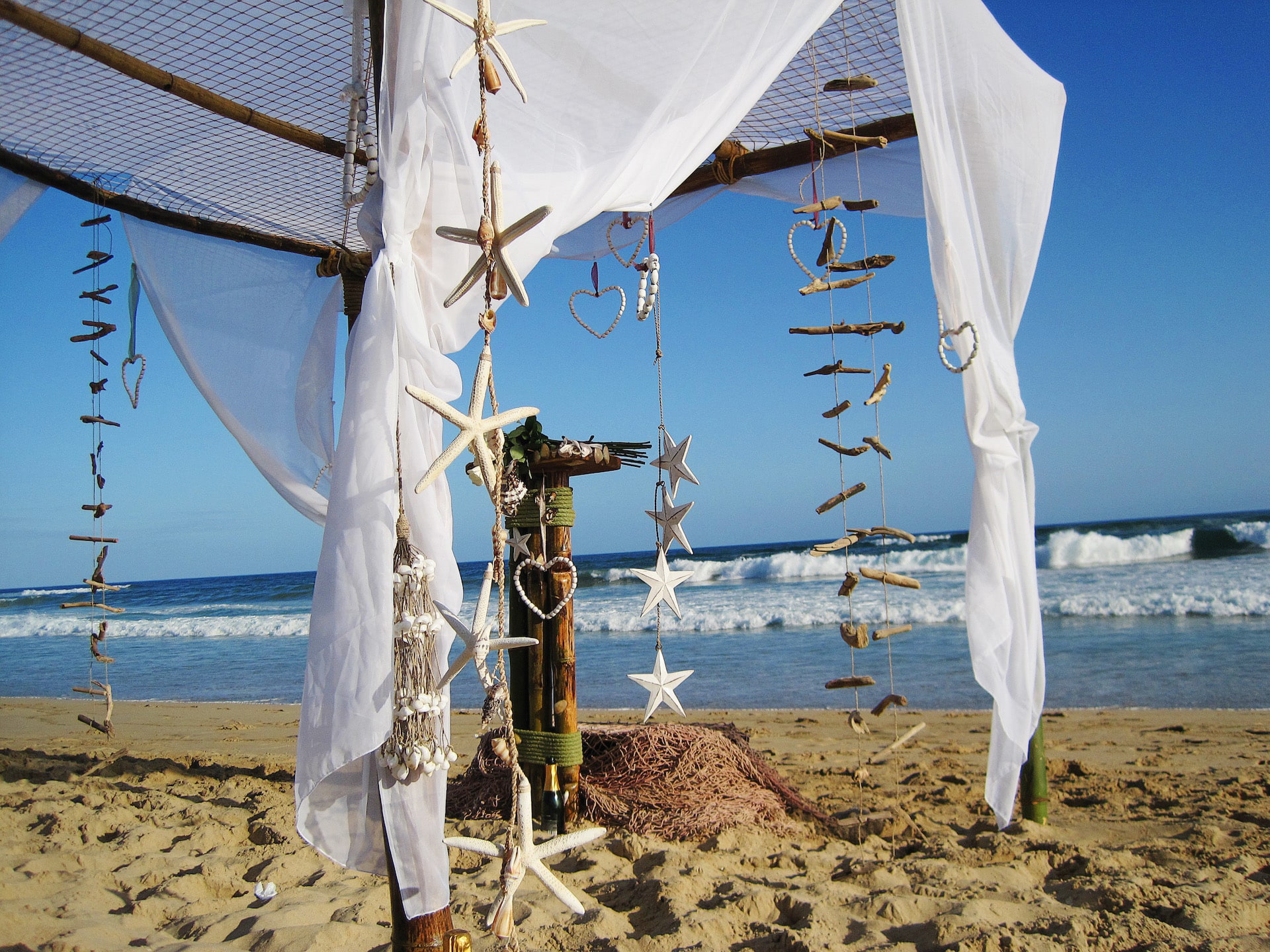 School holidays: every day
Functions larger than 25: Any Day!

R250 for a whole Rock Lobster

(Tariffs are subject to change, once a year on 1 December.)

(PLEASE NOTE: We have a well-stocked cash bar. We also have debit/credit card facilities.)

Booking is essential. Firstly, to avoid disappointment and secondly to enable us to properly prepare for your arrival and to ensure an unbeatable experience.

What our clients have to say

“Absolute Must”
De Vette Mossel is a very special place where you pay and just eat as much as you can. Its meat and fish and deserts its something for all. There is a huge place for the kids to play which is a bonus for me. The food is tasty and never stops there is no shortage as soon as a certain food is finished they just bring a new one. This place is also open air restaurant with sand floors and takes you straight back into the West Coast. The prices at the bar is very good with delicious cocktails. You must do a reservation before going as its not always open and needs a certain number of people before opening. This place is on the beach so the views and sound of the sea is just fantastic.

Amazing experience
This was truly an experience! From the exquisitely themed decor to the animated host (there’s no other way to describe him other than saying he’s a host), this place is amazing. The food is superb and you’ll struggle to eat everything!
Be careful of the “potbrood” – it is the most delicious evil and you’ll easily stuff yourself with it before all the courses have been served.

The atmospheer is relaxed, yet also vibey and energetic.

You don’t feel as if you’re at a restaurant, it rather feels as though you’re visiting your very entertaining uncle who’s an excellent cook! You almost want to thank them for their hospitality, because it really feels like you’re a guest at a really cool party.

It’s definitely worth the money!

All you can eat seafood buffet. It is made over hot coles. Very nice variety of seafood and if you manage to avoid the potbread table and make it to the calamari steaks it is definately worth it. It is also at a very nice venue with play area for the kids. It also has a area for weddings Booking should be made beforehand to avoid dissapointment. Would go again.

One of the greatest eating experiences I have ever had! The food is amazing, vibe is vintage beach side Village, and the event is truly unique.

This has been my 5th visit to De Vette Mossel in Grootbrak. It’s always an amazing experience coming here. The atmosphere is vibrant, full of family laughter and dripping with South Africaness. The food is always of a high quality, something that cannot be missed – the ultimate seafood buffet.

Amazing
Wow, what an experience this place was. Excellent food, best hostesses, lots of laughter. If you would like a food experience like never before, this is it. Feet in the sand and beach within reach. Kids play the whole time and parents can relax. Save! 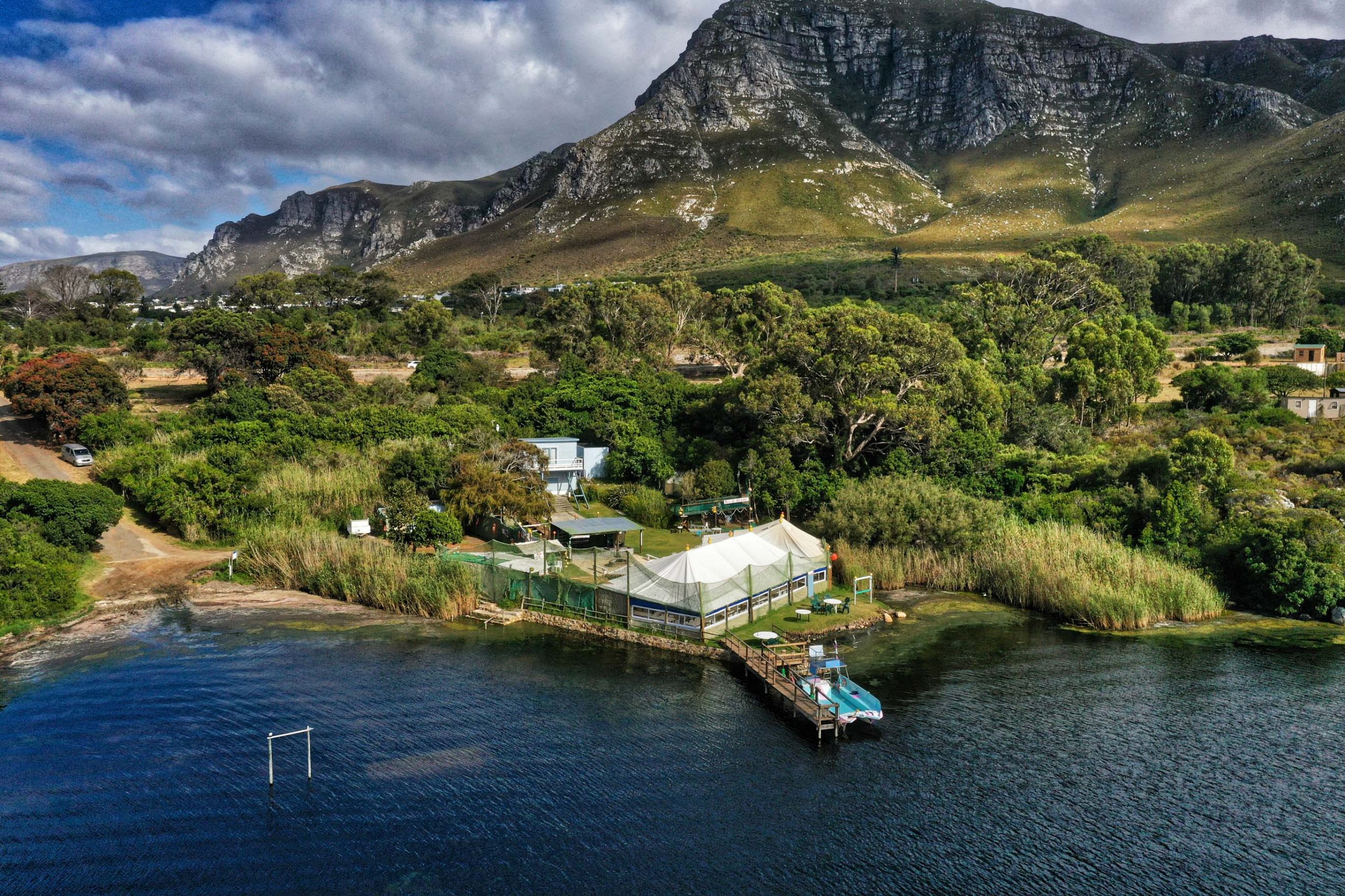 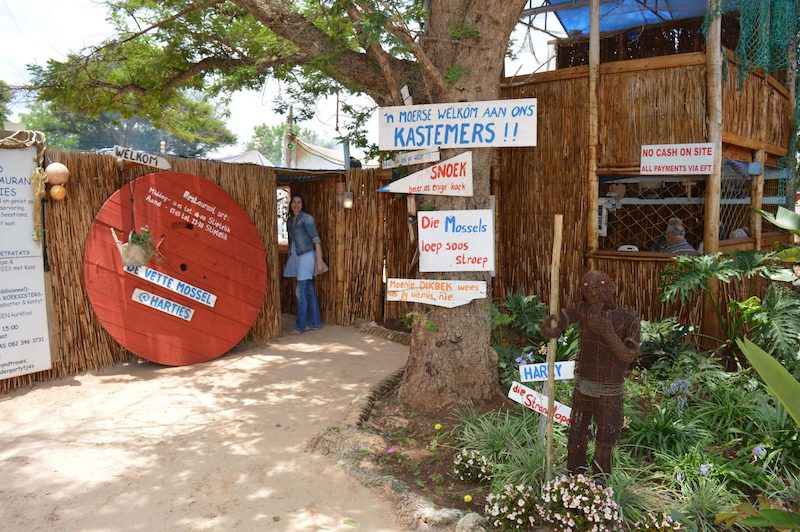 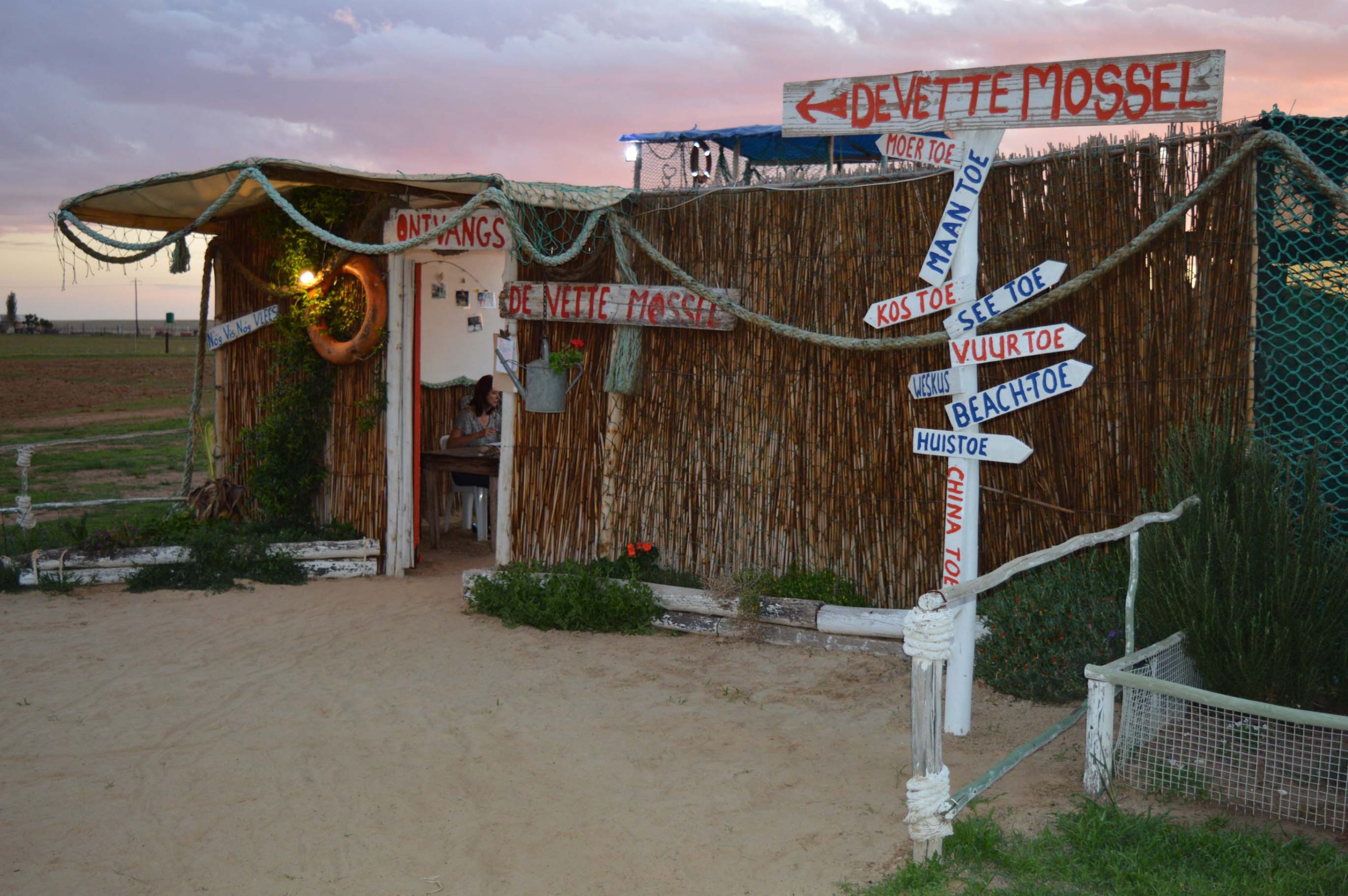 The Town Of Food